Herbal Infusions are a glorious form of tea with ingredients going beyond the plant of Camellia Sinensis. They contain different leaves, flowers, and roots to put forth a rejuvenating and delicious beverage.

Herbal infusions have origins dating back to thousands of years. Legend says that it was a thing even before the Chinese emperor and Herbalist – Shennong accidentally discovered tea in 2737 BC. For many years, herbal infusions had a medicinal purpose. After several more, these became the go-to beverages, and a booming business started worldwide.

Over the years, different nations and cultures have experimented with various herbs to create harmonies of flavors, especially in Asia. Here are the 15 most popular herbal infusions around the world! Mate is a famous herbal infusion featuring dried ground leaves of the yerba mate plant. Its origins date back to the native Guarani people, who were the first to harvest this plant and make this herbal infusion.

With a traditional steeping process, this beverage gets served with bombilla (a metal straw that acts as a sieve) in a hollowed gourd.

The drink represents South American culture. People, especially in Argentina, serve it at several gatherings and occasions, with the gourd and the bombilla for sharing in a group. This infusion is rich in caffeine and has a slightly bitter taste. White tea is a Chinese tea category with a somewhat ambiguous classification. This variety is lighter in color and has a much more delicate flavor than green or black teas. Although there are several variations today, companies harvest white from the tea plant Camellia sinensis when the tea leaves are partially open with the buds covered in tender white hairs, giving the tea its name.

White tea is typically non-oxidized, which helps to preserve its delicate character. When brewed, the infusion gives a subtly sweet flavor with a light straw color and subtle aromas. People add fruit, honey, vanilla, herbs, or citrus fruit to make this infusion delicious. Rooibos is a South African tea plant. Initially, it was a low-cost alternative to European black tea. The name rooibos means red bush, referring to the appearance of the plant.

Today, Rooibos features as a star ingredient of teas and even red espresso. The anti-aging and health benefits of it have kept it in the spotlight since the 18th century. You can add this herb with honey or sugar to prepare an infusion that is famous worldwide. The most common term for the generously sweetened combination of green tea and fresh spearmint is Maghrebi mint tea. Mint tea is popular in the Maghreb region of North Africa, but it is most closely associated with Morocco.

Traditionally, people made the beverage in broad teapots. They steeped the infusion to produce the so-called spirit to brew the leaves in water and it. Da hong pao is a highly prized Chinese oolong tea that is also one of the most expensive teas in the world. It belongs to the Wuyi Mountains of northern Fujian. These plants grow primarily on ledges and cliffs. This tea is heavily oxidized, with an earthy and mineral character, complex aromas, and a sweet finish.

Da hong pao has a centuries-old tradition and is almost mythical in China. The most expensive varieties were from six mother trees, which many believe is the only authentic da hong pao type. These mother trees are no longer harvested and have been safeguarded and insured. With no trademark on the name, there are several varieties of Earl Grey. This ever-famous herbal beverage traditionally features black tea with bergamot oil. Different regions use different flavorings to enhance their flavors.

If you want to make this drink at home, you can get Earl Grey in the form of loose tea leaves or tea bags. Market variants have a slightly tannic appearance with an intense aroma of citrus bergamot.

The origins of this herbal infusion remain disputed. Some believe that it came after Prime Minister Charles Grey. Others argue that the tea’s name dates back to the 1880s. There are even references to this bergamot-flavored herbal drink dating back to the 1820s. Matcha is a Chinese green tea with different harvesting, processing, and preparation methods. The bush of Camellia sinensis is grown with farmers not letting sunlight reach the leaves for three to four weeks before harvesting.

Then, leaves are plucked and cleaned from veins and stems to press into fine powders. Unlike majority herbal infusions, matcha tea always comes in powdered form. Varieties of it feature several other herbs for creative flavors and aromas. It is a famous beverage in Japan. When you talk about herbal infusions, you cannot leave South Korea behind!

Famous for its experimentation and representation of culture through food, South Korea is known for its herbal infusions and teas. Here is our guide to Korean Teas.

Omija-cha, a popular Korean infusion, features the five-flavor berries that are dried to make this tea. Many people boil them in hot water to bring out the bitter flavors. You can also steep them in cold water to follow the traditions.

Then, you flavor the drink with sugar or honey. With a distinctive red hue, it features pungency, sourness, sweetness, and saltiness. Another Korean herbal infusion that is also popular worldwide is Daechu-cha. The star ingredient of this beverage is jujubes. The tea has dried jujube boiled in water or a preserved one diluted in warm water. To add to its taste, we recommend garnishing it with pine nuts!

The colors of the tea are either dark red or brown. Many people love it because of the health benefits it carries. Made with yulmu seeds, also called Job’s tears, Yulmu-cha is a Korean herbal infusion that you must taste as a tea lover.

It features finely grounded roasted seeds in the form of powder. You dissolve this powder in warm water. The result is a deliciously opaque and creamy drink with a nutty flavor. You can get pre-packed powdered mixes if you want to enjoy them. Some yulmu infusions now come with grains, nuts, and other seeds. 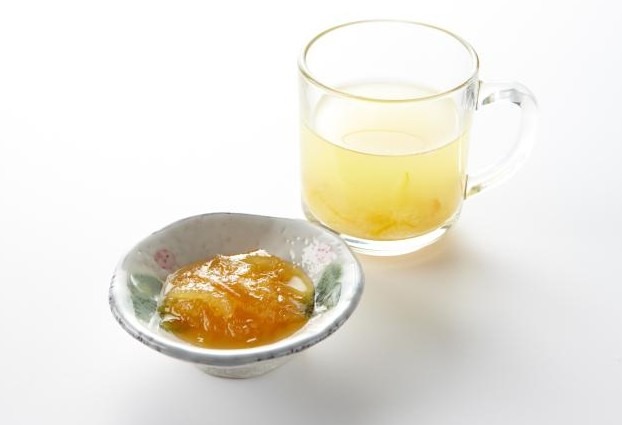 Yuja-cha is a Korean citrus infusion for winters. It features Yuya—a lemon-like citrus fruit native to China. The fruit got introduced to South Korea during the Tang dynasty when people creatively introduced it into their herbal infusions. It features fresh sliced fruit and sugar in warm water. For preservation, you use Yuya, honey, sugar, or water.

Herbal infusions fundamentally are tea. But they differ a bit in respect to the number of herbs used and the steeping time. Typical tea comes from the plant bush Camellia Sinensis whereas herbal infusions result from a variety of plants.

Herbal infusions also tend to be more known in Asian countries like South Korea and China. Speaking of the former, Korean teas and herbal infusions represent their culture like their cuisines. Here is our guide on the great history of Korean cuisine!