The most popular dishes that have come from Korea are arguably the spicy and savory ones like the bulgogi and kimchi. However, there are plenty more flavors that Korean cuisine can offer than just these kinds of dishes. Not many people know this, but Korean cuisine offers sweet foods too.

Korea has dozens of desserts that are sold in restaurants, food stalls, or convenience stores. Some of these desserts may be obscure, and some may be popular with locals, but all of them provide a satisfying and refreshing experience for your taste buds after eating a lot of food with gochujang (spicy chili paste) and ganjang (Korean soy sauce).

Here are some of the most delicious desserts that you and your family can try in Korea, at restaurants serving Korean cuisine, or even at home. A famous street food in South Korea, hotteok is a Korean pancake that has sweet honey syrup, brown sugar, cinnamon, and bits of peanuts as its filling.

The hotteok’s dough is made of wheat flour, water, sugar, milk, and yeast. The yeast will then make the dough puffier after a few hours of letting it rise. After rising, the dough is cut into small pieces and molded into balls. These little balls are then filled with the sweet mixture. Before being dried in the griddle, the balls of dough are flattened first to form the usual shape of pancakes. Kkul-tarae, translated as “honey skein,” became a famous candy treat all over the world due to the viral videos of entertaining kkul-tarae makers popping up online. Makers of kkul-tarae would often entertain customers by showing how this delightful dessert is made in their stalls.

The dessert’s dough, which is made of honey-maltose, is stretched and kneaded into 16,384 strands that look like threads of silk. The dough is then filled with different fillings that usually consist of nuts, chocolate, or other sweet ingredients.

On November 7, 2000, the name of the dessert was trademarked in order to sell it as a different candy from the Dragon’s beard, a traditional Chinese candy snack. Songpyeon is a half-moon shaped Korean dessert that consists of rice powder and different ingredients such as honey, sesame seeds, and red bean paste.

All of the songpyeon’s ingredients are usually steamed on top of pine needles that give the dessert a fragrant smell. The name of this snack is derived from the Korean word for pine tree (songpyeon).

It has been a tradition for many Korean families to make their version of songpyeon during holidays. The songpyeon that they made is offered to neighbors and relatives as a symbol of respect, peace, or friendship. Also, it is said that those who make the best-looking songpyeon will be able to marry a good husband or wife and have a healthy baby.

Dasik is a cookie snack made from rice flour, black sesame, soybean, chestnut, pine pollen, and honey that is pressed in using a dasikpan, a unique pan with decorative patterns that are engraved to the cookies once they are pressed. These cookies have different colors, which are yellow, green, pink, white, and black.

The dessert’s name dasik came from the words “tea food” because this is often served during tea time in Korea. Another rice cake dessert similar to songpyeon, injeolmi is made by steaming glutinous rice and pounding it before forming the dough into small pieces and covering it with dry bean powder.

Injeolmi is the most popular snack eaten in Korea during parties or feasts because of its high quality. Bungeo-ppang is a pastry that is shaped like a fish and usually has a filling made from sweet red bean paste. Traditionally eaten during winter seasons in Korea, the bungeo-ppang became one of the most well-known street foods because of how easy you can eat it on the go. 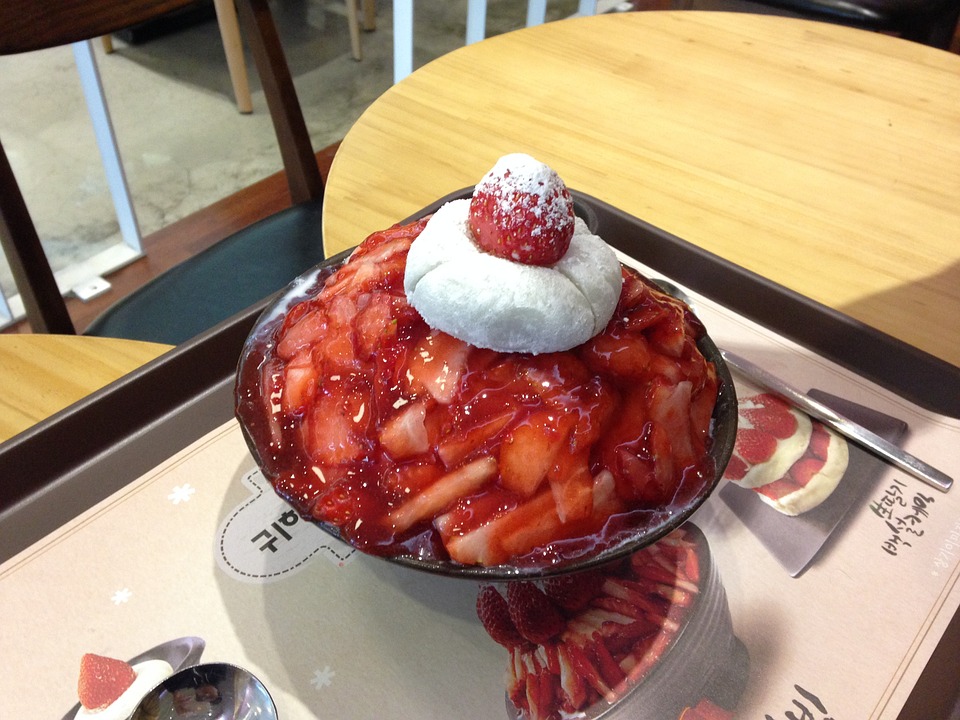 Bingsu is a Korean dessert that consists of shaved ice and various toppings that include slices of fruit, sweet beans, nuts, condensed milk, and fruit syrup.

One of the earliest incarnations of bingsu in Korea is the patbingsu, which is topped with sweet red bean paste. Patbingsu is said to have first been eaten by Koreans during the Joseon Dynasty, and the dessert only became popular during the occupation of Japan. After World War II, the other ingredients we now see in bingsu, like fruit slices and nuts, came from western influence during the Korean War from 1950 to 1953.

Melona is a melon-flavored ice pop that is made by Binggrae, a company specializing in Korean desserts.

The ice pop was first sold by Binggrae in 1992, and it has subsequently gained increasing popularity ever since. Available in almost every corner of South Korea, the ice pop became the top eighth most popular product in 2007 according to the data gathered by FamilyMart, a well-known convenience store originating from Japan.

Even though the ice pop became known for its melon taste (hence the name “Melona”), there are other flavors that Binggrae has added over the years to the Melona brand. These flavors are strawberry, banana, mango, coconut, and honeydew melon.

Melona is arguably the most eaten Korean dessert out of all because of its wide availability in other countries. These countries selling Melona include Vietnam, the Philippines, Singapore, Brazil, Germany, the United States of America, and Canada.

There are still more uncommon and rare Korean desserts to uncover and try, but these desserts on the list are the best ones that you and your family will surely enjoy eating. Be sure to buy desserts like Melona and bingsu after your family eats at a Korean BBQ restaurant to complete the Korean food experience.