Throughout Korea’s rich history, the people of the country have developed hundreds of different dishes out of the necessity to survive the different environments that they are living in. Because Korea has experienced different waves of cultural change, from the rise of the Joseon dynasty to the Japanese occupation before World War II, the country’s dishes have also received changes in recipes or ingredients used.

Koreans have done their best to preserve the traditional way of making some of their dishes, and their hard work of not letting these dishes be forgotten was fruitful since Korean cuisine has received increasing adoration not only from Korean millennials but also from the people all over the world.

These are a few of the traditional dishes in Korea that you may have tried before or had never even heard of and should receive acclaim. Bulgogi is a staple Korean dish usually served in Korean BBQ restaurants. Bulgogi is made using marinated slices of pork or beef, ganjang (Korean soy sauce), garlic, black pepper, sugar, and sesame oil. After marinating the meat, it is grilled and served on a plate with green peppers and chopped.

This dish was called maekjeok during Korea’s Goguryeo era and was cooked on a skewer. During the Joseon dynasty, it was then called neobiani, which means “thinly spread meat,” and was eaten only by the elite during that period.

Today, all people in Korea can eat bulgogi, and they normally eat it by putting a little bit of ssamjang, which is a sauce made of gochujang (red chili pepper paste), doenjang (soybean paste), garlic, and green onions. After putting dipping sauce, a piece of bulgogi is then wrapped in a big piece of lettuce called ssam. 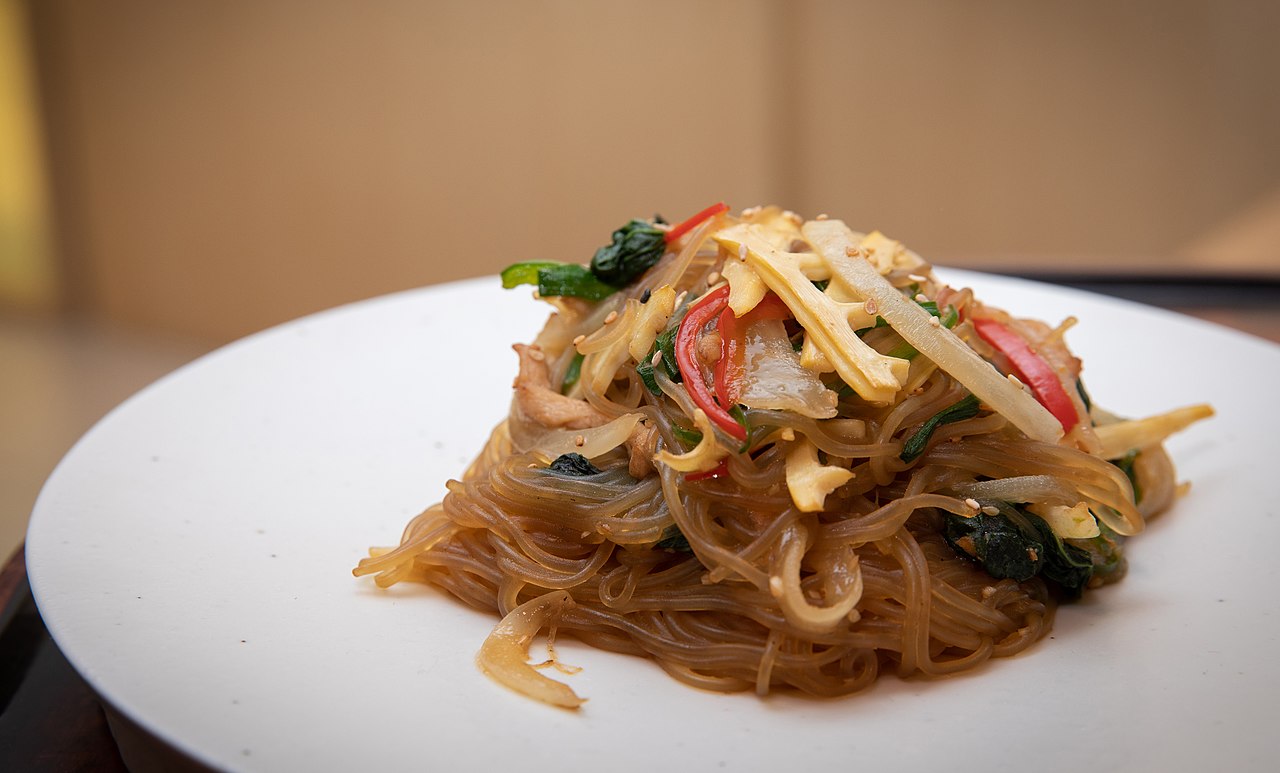 Japchae or chapchae is made from cellophane noodles called dangmyeon that are formed using sweet potato starch.

These cellophane noodles are often made in factories and dried before packing them in plastic bags. To prepare them as an ingredient to a dish, the noodles are boiled in hot water in order for it to soften.

Because of the soy sauce mixed with the noodles, japchae has a relatively sweet taste. To add flavor to the dish, cooks often add stir-fried vegetables and strips of beef or chicken meat.

Japchae was another dish that was only served to the elite and the royal family during the Joseon period, but they are served nowadays as either a main dish in some regions or a side dish during special occasions. Songpyeon is a half-moon shaped Korean dessert that is made using rice powder and different ingredients such as and red bean paste and honey.

Traditionally, many Korean families make their version of songpyeon during holidays, and they offer the songpyeon that they made to relatives and neighbors to signify the family’s respect for them. In addition, it is believed that whoever makes the most magnificent-looking songpyeon will be able to marry a beautiful spouse and have a healthy child in the future. Another traditional sweet dish in Korean cuisine, yaksik if often referred to as the “medicinal rice” because of the honey that was used to make the dish. Korean during the Joseon period believed that honey has several medicinal properties, and they often consume it to improve their bodies’ overall health.

According to the collection of Korean legends called the SamgukYusa, the ruler during the Silla dynasty named King Soji received a strange message on January 15, 488, from a crow. The message says that he is in danger because several people are planning on revolting against him. He and his kingdom were subsequently saved thanks to the message.

Years later, Koreans have designated January 15 as a day of remembrance for the salvation of King Soji, where they offer glutinous rice during traditional rites. The glutinous rice that they served every January 15 then became yaksik. Samgye-tang is a traditional soup that has a cooked whole young chicken (poussin) drowning in a large bowl of soup. For better flavor, the samgye-tang is stuffed with rice, garlic, ginseng, and jujube.

Because of its very nutritional ingredients, samgye-tang is considered as a medicinal soup that improves one’s health.

Because of the rising popularity of Korean fried chicken, samgye-tang has become uncommon in most Korean restaurants because it is harder to prepare than fried chicken. However, there are still several restaurants in the country that specialize in making this special soup. The popular dumpling of Korean cuisine, mandu is usually cooked and prepared in different ways. Some steam it, a few boil it, but most people often fry it using a pan or a deep fryer. These various styles of cooking mandu were developed by several regions in Korea who wanted to explore ways of eating dumplings.

Before it became a popular appetizer or side dish in Korean markets and restaurants, mandu was only served to royalty during the Goryeo period. It is interesting to note that Buddhism was a prominent religion during that time, and Buddhists are typically prohibited in eating meat. However, because of the Mongolian’s influence in the land through intermarriage with the Korean royal family, meat consumption has been quite popular among the elite in that period. Also, the Mongolians of the Yuan dynasty are the ones who have introduced mandu to the country.

Most of these traditional Korean dishes have surprisingly survived for centuries, making them as proper symbols of the country’s perseverance to maintain their rich cultural heritage. Despite its tumultuous history of invasions, occupations, and separations, Korea retained its identity not only through its culture but also through its cuisine.